ALL ABOUT THE AUCTIONEER’S CHANT 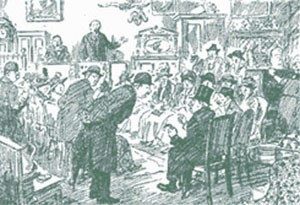 The chant – that rapid-fire, quick-cadence combination of numbers, words and sounds that keeps an auction clipping along – is one of the most identifiable features of auctions and auctioneers.Fascinating, sure. Remarkable, undoubtedly. Exciting, obviously. But what the chant is in its simplest form is communication. It’s an auctioneer’s way of telling bidders what they need to know regarding the sale of a particular item at its time of sale. And, because an auctioneer’s job is to sell the most amount of property quickly, the chant is frequently fast.Newcomers to auctions are sometimes confused by the auctioneer’s rapid speech and mistakenly feel the auctioneer is saying words and sounds that aren’t meant to be understood. Although the most widely recognized talent of the auctioneer is undoubtedly his or her ability to talk fast – the first thing people should know about auctioneers is that their main job is to communicate, and if the audience cannot understand him or her, the auctioneer is not doing a good job.This method of rapid talking is called the auctioneer’s chant. No one seems to know for certain when or where the rhythmic chant used by most North American auctioneers originated. It just seems to have evolved of necessity as auctioneers saw the need to sell items in a more rapid manner. The chant is a tool the auctioneer uses to hold the audience’s attention and to keep the auction moving at a steady pace.Unlike other types of sales, an auction is a one-time event where all the customers are present at the same time. Thus, the auctioneer is responsible for selling all the items within a few hours, and his or her use of the chant helps keep the items moving. In simplest terms, the chant is merely a series of numbers connected by “filler” words to give the buyer time to think between bids. “The chant is part of what makes an auction so unique,” said John Roebuck, CAI, AARE, president of John Roebuck and Associates, Memphis, TN. “And though professional auctioneers are much, much more than just fast talkers, the chant is one of the most intriguing parts of an auction to many people.” A basic auctioneer chant goes like this:

The filler words are everything except the numbers. Filler words are used to remind buyers of the last number bid and to give buyers time to consider – whether they want to bid higher. Think of filler words as carriers — the; filler words “carry” the numbers, which are the most important part of the chant. Using filler words that connect and roll, auctioneers create a steady rhythm in their chants. The rhythm enables the crowd to listen longer and faster by keeping the bids at regular intervals. This helps the bidders know what to expect next and to keep the bids coming at a constant pace. Many people think auctioneers sound like they’re singing because the chant’s rhythm has a beat much like music does. The steady rhythm allows the auctioneer’s chant to move more rapidly than normal speech. Since auctioneers have a limited amount of time to sell many items, they need to speak quickly. At an average household estate auction, the auctioneer’s chant helps him or her sell an average of 60 items per hour. Certain types of auctions go even faster: wholesale automobile auctioneers frequently sell 125-175 cars per hour and tobacco auctioneers may sell 500-600 lots per hour. Besides keeping the auction moving, the fast-paced chant creates excitement and makes the auction environment entertaining. Auctioneers will adjust their pace, depending on the bidding experience of their crowd. After all, the auctioneer can only chant as fast as the bidders will bid. Next time you attend an auction, concentrate on the numbers in the auctioneer’s chant. The numbers are the most important part of the chant, and are pronounced the most clearly. The chant is only hard to understand if you are not concentrating on bidding for an item you want to take home! Courtesy of the National Auctioneers Association.

WHAT TO DO AT AN AUCTION

Auctions are unique — in experience, in sound, in practice. Many auction attendees find the experience addictive. They report that there’s nothing quite like the thrill of finding something they want and then bidding against others who want the same thing.But you don’t have to be a seasoned auction attendee to be able to experience the thrill of auctions. Auctioneers across America are glad to welcome new bidders to their auctions. And though almost everyone has heard the old story about the person who attended an auction, scratched his nose and came home with an item he’d not intended to buy, pay no heed to that myth.”People who have never been to an auction before should certainly give it a try,” said John Roebuck, CAI, AARE, president of John Roebuck and Associates, Memphis, TN. “Don’t be intimidated – go and have fun!” Feel free to just get your feet wet – don’t think you have to go to your first auction ready to bid. Attend an auction or two in your area to get a feel for how they are conducted. Watch and listen, then move on to bidding if that makes you comfortable. Many auctioneers spend some time addressing commonly asked questions and explaining how the auction is going to work. Some even conduct pre-auction or practice sessions, or brief tutorials, about the auction process. If you’re interested in going to your first auction, check with local auctioneers to see if they offer such a service. Always remember that at an auction you’re free to ask a question if you don’t understand something. Auctioneers and their staffs want people to continue to come to their auctions, so they’ll do all they can to encourage repeat business! Ask a question of a member of the auctioneer’s team, and they’ll find the answer for you. When you arrive an auction site, register for a bidder number and read the rules printed on or displayed on posters, brochures or handouts. Again, ask questions if you don’t understand a policy. Inspect the merchandise you’re interested in, as most is auctioned on an “as is, where is” basis. This means it is not guaranteed. When you buy an item, you become responsible for it. And, keep in mind that you’ll pay for the items you purchase before you leave the auction, even if you aren’t taking everything with you that day. In order to bid at an auction, you need to make contact with the auctioneer or the ring-person. A ring-person is someone who takes bids from the audience and then passes those on to the auctioneer. To bid, hold up your bid card, your hand or shout “yes.” The auctioneer or ring-person will make eye contact with you, take your bid and immediately turn and seek another bid. You can remove yourself from the process at any time by shaking your head “no” or saying “no” if the auctioneer or ring-person turns your way. Should an auctioneer or ring-person misinterpret any of your signals, simply report the mistake right away. Courtesy of the National Auctioneers Association.

Take a look at many advertisements for auctions, and you’re bound to see the words “absolute” or “reserve” making their way into the text.Have a conversation about auctions with an auctioneer, and chances are you’ll hear the words at some point. The two words are part of auction jargon, part of the lexicon of language that surrounds the auction industry.”Auctioneers use the words “absolute” and “reserve” to describe an auction and how it will be conducted,” said John Roebuck, CAI, AARE, president of John Roebuck and Associates, Memphis, TN. “Calling an auction “absolute” or “reserve” tells bidders what the auction rules are, so to speak.”

An absolute auction is one in which the property is sold to the highest qualified bidder with no limiting conditions or amounts. The seller may not bid personally or through an agent. Absolute auctions can also be called auctions without reserve.

Say, for instance, that a piece of real estate – a home – is being sold at absolute auction. The qualified bidder who makes the highest bid during the auction will purchase the home.

Say, for instance, a seller has a boat being offered at a reserve auction. The seller can decide, based on the bids, to sell the boat or to reject to sell the boat for the amount offered during the auction. Both are valid forms of auctions; the two simply are different ways of conducting the auction on the client’s behalf. Unless stated otherwise, an auction is presumed to be with reserves. Courtesy of the National Auctioneers Association.
Shopping Basket